The richest site by its strata

The richest site by its strata on the Brijuni stretches on a surface area somewhat larger than 1 hectare in Madona Bay. Findings from the period of the Roman Republic and Empire, late antiquity, Eastern Goths, Byzantium, the Carolingian period and Venice testify to its longtime settlement.

The richest site by its strata

Not long after the first villa was built in Dobrika Bay in the 1st century BC, during Augustus' reign, a new villa rustica was erected partly on the site of the first villa. Its dimensions were 51 x 59 meters with a central courtyard and equipment for producing olive oil and wine, as well as cellars, and modestly arranged housing units.

Life in the villa

Life in the villa went on until the end of the 4th century when, due to social changes, the villa grew into a closely-built-type settlement with houses, olive and grapes processing plants, storage rooms, workshops, blacksmith workshops, ovens, in short, all elements necessary for an independent life of a community.

At the beginning of the 5th century, there was a spreadout of the settlement from late Antiquity around the Roman villa on the castrum, and for its protection, the defensive walls were erected in mid-5th century. Either side of the wall could be climbed onto by single or double stairs, while the walls were reinforced with counterfort on the side facing the sea.

St. Mary's basilica was erected in the close vicinity to serve the ceremonial needs of the numerous population of the castrum, while the church of St. Peter was erected afterwards (6th century). The specificity of St. Mary's basilica is in the appearance of the sanctuary ending with a rectangular apse, while most of the basilicas of that period had a semicircularly organized sanctuary.

The Frankish rule at the end of the 8th century introduced a new feudal property. The walls of the Carolingian villa were articulated by lesenes, while oil, at the time, was produced in the rooms by the sea. The entire process of oil production, from grinding of olives in the mill to pressing in one of the three presses is depicted here.

Life in the castrum was last evidenced during the Venetian era. 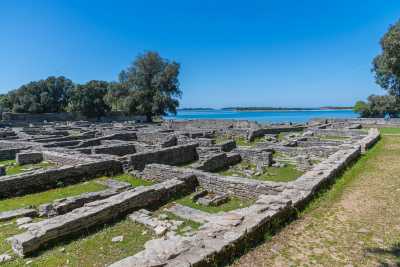 Wake up the explorer in you and relive all eras in the Byzantine castrum, from the Roman Republic and the Empire to the Venetian Republic.