Works of art in the park

Sculptures in the park

Exceptionally well blended into the natural environment of the island, the sculptures are expressions of various historical and stylistic periods of the past century.

At the beginning of the 20th century, when Paul Kupelwieser was the owner of the archipelago, sculptures “Labour” and “Caritas” by Caspar Clemens Zumbusch (1830 –1915) were set up in the vicinity of the harbour.

Upon his departure from the Vitkovice ironworks, Paul Kupelwieser was given a table decoration representing two allegorical figures: Labour (blacksmith) and Caritas (mother with children). These characters portrayed Kupelwieser himself, the way he was perceived by the owners of the ironworks: a hardworking individual graced with respect, loyalty and love. The said table decoration was used as a model for marble sculptures which still serve as reminders that hard work and selfless love lead to great achievements and that even a malaria-ridden swamp can be transformed into an oasis of natural beauty and tranquillity. 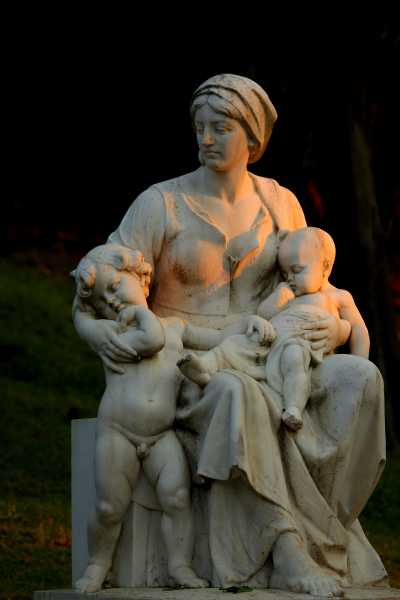 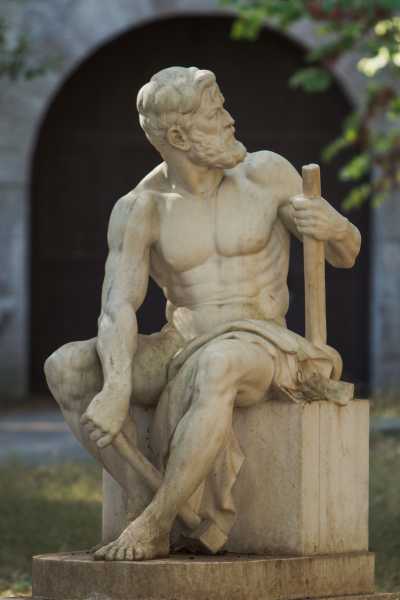 The early twentieth-century sculpture presents a scene from Greek mythology – Leda and the Swan. Zeus managed to seduce Leda, the Spartan queen, only after he had taken form of a swan. The sculpture was originally intended to decorate the former wintertime swimming pool constructed in 1913 adjacent to the hotel complex in the main Brijuni harbour. At the time, it was the first wintertime swimming pool with heated salt water in the Adriatic that boasted numerous therapeutic, medicinal and cosmetic benefits.
The sculpture is situated in the park behind Hotel Neptun. 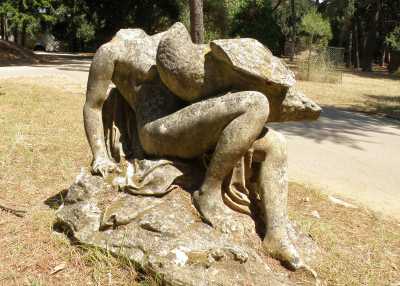 In the main Brijuni harbour, suggestively displayed on a rock, the bronze sculpture “Bather” by the Slovenian artist Boris Kalin has been welcoming the visitors to the islands since 1954. This delicately shaped semi-reclining female nude sunbathing on a mat greets and escorts all the visitors to the Brijuni. 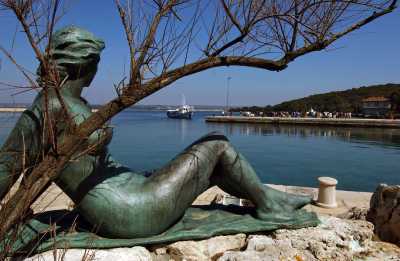 Woman with a Bucket

The bronze sculpture “Woman with a Bucket” (“Woman from Primorje”, “Water Carrier”) was made in 1956 by sculptor Frano Kršinić. It represents a leaning woman intent on pouring water from the bucket into the stone reservoir at the base.

The sculpture forms an integral part of the memorial to a remarkable technical achievement – extraction of spring water on the island. In fact, geothermal surveys of spring water were conducted on the island from 1951 to 1953. In addition to other locations, water was also found on the meadow with an indicative name – “Living Water”.

The possibility of extracting underground water on the island was explored as “a new victory against nature” based on the idea of architect Alexander Freudenreich. Artistically, architecturally and technically, stone, bronze and glass were used to illustrate water scarcity in the past (symbolized by Kršinić’s sculpture), from the then arduous life on the islands (represented by a cistern used for rainwater catchment), to prosperity in the future (a glass pyramid above the spring water borehole). This exceptional technical achievement of using underground water on the island from a depth of 251 metres is also emphasized on a memorial stone which, alongside the sculpture, the cistern and the glass pyramid (memorial fountain), forms an integral part of this scene.

Both the sculpture and the glass pyramid also have the function of the fountain. The glass pyramid is meant to create an astonishing light effect: the built-in reflectors illuminate the dispersed drops of water within the stone plinth of the closed glass fountain with a pyramidal shape thus creating a rainbow. 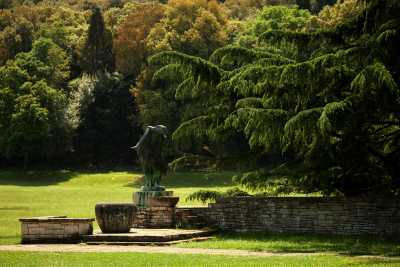 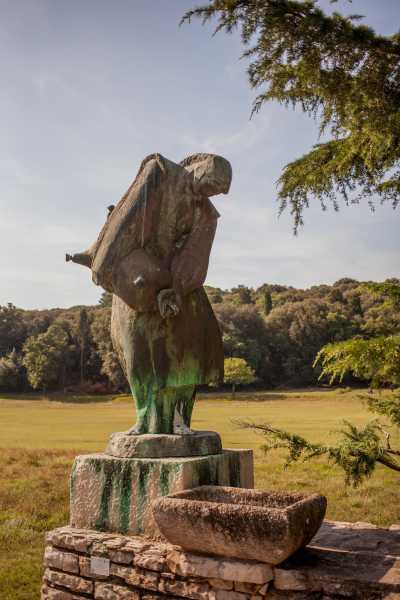 “As a token of great respect for president Tito and in memory of his personality,” sculptor Dušan Džamonja donated his sculpture “Peace Dove” to the National park in 1983. The sculpture made of corten (welded iron chains) was created “with the intention to symbolize the idea of Peace and freedom”. 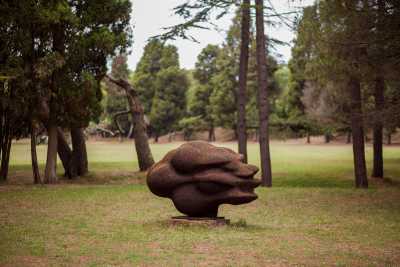 Put up on a hillock right beside the harbour, the “Monument to Sony” by the Italian authors – artist Fabiola Faidiga and sculptress Madia Cotimbo was a gift to the National Park in 2012 in memory of the elephant Sony given to Tito by the Indian Prime Minister Indira Gandhi.

The two-year old Sony arrived to the Brijuni in 1970. He lived at the safari park with his companion Lanka until the end of his life in 2010.

The sculpture made in 2008 is part of a wider project entitled CIRCUS MEME by Fabiola Faidiga encompassing several levels of presentation. In addition to the monument to Sony, the project comprises a tightrope walking performance, a photo exhibition and video screenings.

The life-size sculpture hand carved from polystyrene was made by sculptress Madia Cotimbo. It is covered with road maps of cities fatefully connected with Sony’s travels, those real and those imaginary: New Delhi (the capital of Sony's birth country), Belgrade (the capital of the country that accepted Sony), the Brijuni (the archipelago where Sony lived almost all his life), Zagreb (the capital of the country where Sony lived), Trieste (the city where the CIRCUS MEME project was developed), Berlin (the city Sony visited only metaphorically). 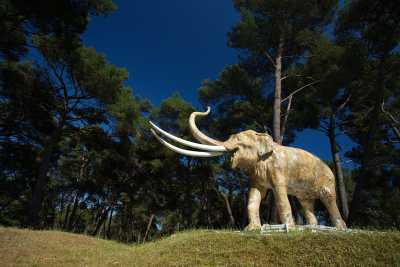 Aimed at popularizing Brijuni’s geological and paleontological heritage, a reconstruction of a dinosaur resembling an allosaurid was put up in 2012 on Cape Vrbanj to show the natural size and the species that left its traces on this spot. Around sixty footprints of large bipedal carnivores have been discovered on the cape. The footprints’ sizes indicate that they belonged to Theropods, large rapacious carnivores who left their traces some 125 million years ago as they roamed the shallow waters of the former Tethys Ocean.

A scientific and artistic theropod sculpture was made by sculptor Stjepan Gračan in collaboration with numerous experts: Dr Zlatan Bajraktarević and Dr Aleksandar Mezga from the Department of Geology of the Faculty of Natural Sciences and Mathematics in Zagreb, the academy-trained artist and stage designer Zlatko Kauzlarić Atač and illustrator Berislav Kržić. 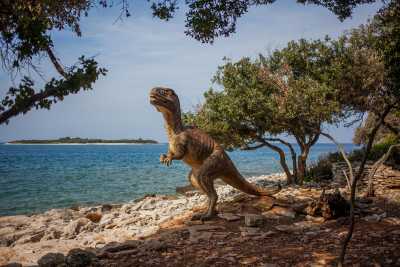 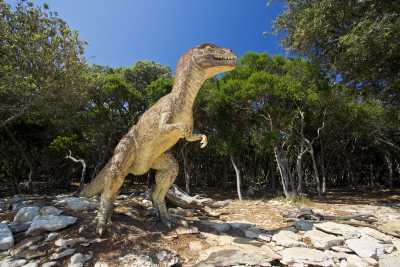