St. Mary’s basilica is a three-nave church of square ground plan whose lateral walls have been preserved almost in their original height. The size of the church (11 x 24 m) indicates a large population of the nearby Byzantine castrum erecting this edifice in the 5th/6th century.

Church for the population of the Byzantine castrum

Specificity of the basilica

The altar area is two steps higher and is divided from the church nave by a partly preserved triumphal arch. The altar basis is preserved in situ. The atrium of the basilica holds a small collection of stone monuments, exhibiting, among other, church finds, transennae, stone window grids.

The specificity of St. Mary's basilica is in the appearance of the sanctuary ending with a rectangular apse, while most of the basilicas of that period had a semicircularly organized sanctuary.

In the open front part of the basilica and around it was an Early Christian cemetery 300 m long, stretching as far as the southeastern corner of the castrum.

Benedictine monastery by the church

The beginning of the 9th century saw the renovation of numerous churches, among them St. Mary's. It was refurbished with new stone furnishing bearing the recognizable three-ribbon interlace pattern. The large pagan population must have caused missionary activities carried out by the Benedictines from the many monasteries. If not earlier, this is when the Benedictine monastery was founded, stretching north and south of the basilica.

Basilica in the times of the Templars

In the 13th century the basilica belonged to the Templars. When their order was abolished in 1312, life in the monastery faded away.

Near this church, a smaller single-nave church dedicated to St. Peter was built whose floor was decorated by a tricolored mosaic. 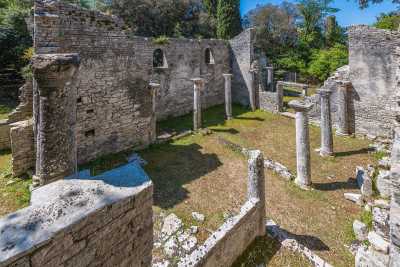 Take a walk in the archaeological site of St. Mary's basilica and find your inner peace.