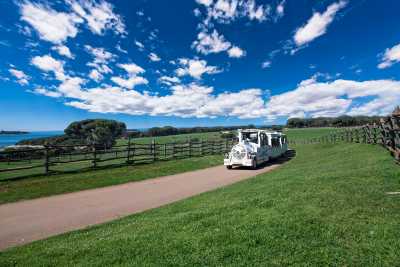 On the northern edge of Veliki Brijun a unique Safari Park stretches along 9 ha inhabited by a peculiar mix of autochthonous Istrian and exotic South American, African and Asian fauna. The Indian elephant Lanka, llama - the South American camels which, according to the native legend, were domesticated in the very beginnings of human existence, zebras, Indian sacred cows and ostriches are the friendly inhabitants of the Safari Park. 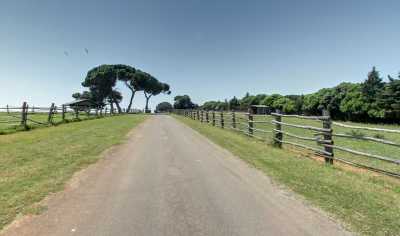 A mix of flora, fauna and human action

With the arrival of the tourist train, the Safari Park gate opens and we enter a different world - a mix of flora, fauna and human action. On the right side of the entrance to the Safari Park, ostriches and peacocks proudly strut around, among which completely white albino peacocks stand out.

On the left side of the entrance to the Safari Park, llama is strolling, the South American camel, which differ from the camels we know by a smaller body and a relatively large head that is pressed together, with a pointed snout, large eyes and slender legs with toes that are set apart.  Llamas have no hump and are covered with long, thick wooly fur. They live in the high plains of the Cordilleras up to 4500 m above sea level.

The steppe and mountain zebra

The steppe and mountain zebra, received as a gift from Guinea in 1960 and 1961 from Sékou Touré, former president of the Republic of Guinea. In nature, zebras inhabit the mountainous parts of southern and eastern Africa. The zebu or the sacred Indian cow (Bos indicus) was a gift from the Indian statesman and politician Nehru, and it was settled on Brijuni in 1959. This small sacred cow is in fact a dwarfish species of sacred Indian cows and shares all features of the animal, but is smaller in size and less heavy.

The ethno park is an area within the Safari Park presenting a typical Istrian homestead, and the Brijuni administration has enriched it with autochthonous animal species – the Istrian sheep (Istrian "Pramenka"), donkeys and goats. These friendly inhabitants of the Safari Park will cheer everyone up. 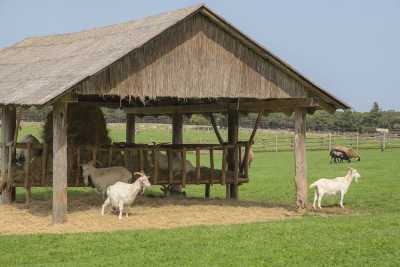 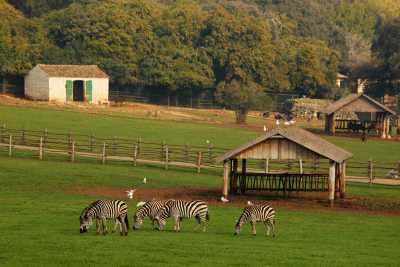 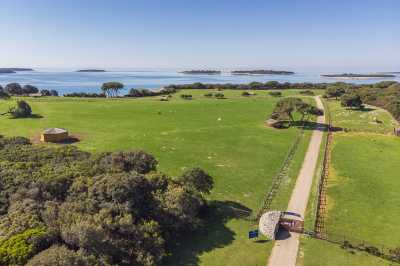 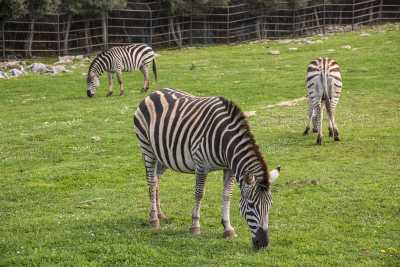 A friendly resident of the Safari Park

The favorite animal of the Safari Park

We arrive to Lanka the elephant, who arrived to Brijuni as a gift from Indian Prime Minister Indira Gandhi in 1972. This elephant is the favorite animal in the Safari Park. In nature, elephants live in the jungles of India, Sri Lanka, Borneo and Sumatra. Male elephants can weigh up to 6 tons which makes them the largest living terrestrial mammals.

Despite its huge size, the elephant has a light and barely audible gait since each foot has a thick pad of elastic tissue that acts as a cushion. An elephant touches, smells and breathes with its trunk, and even uses it to make sounds.

You can also see sea turtles from the Sea Turtle Rescue Center under the competence of the association Marine Educational Center Pula, which operates as part of the Pula Aquarium. They were found injured and have been recovering during the warmer months in the National Park.

It's time to take a break, refresh yourself at the Café Soni i Lanka. Stop for a while, absorb the sunshine, look around and enjoy the perfect harmony of nature, after which we leave the Safari Park by train.

It is prohibited to feed animals in the National Park, and for their benefit, please refrain from it. 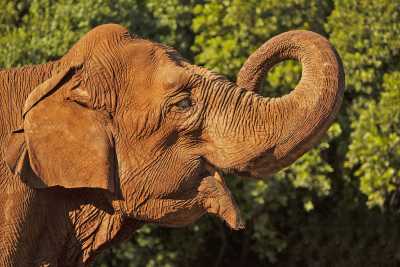 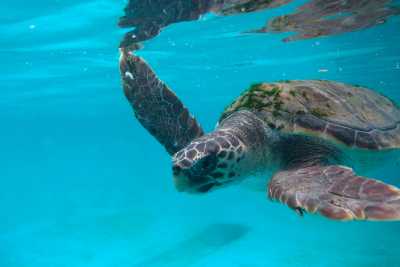 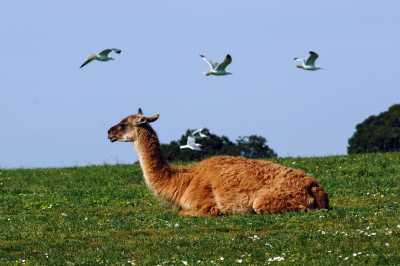 Riding on the train through the Safari Park is fun for all visitors, and is an unforgettable experience for children. By entering the park, you will discover new animal species that you have probably never seen in person, so cheer up your little ones and bring them along to this interesting adventure.