Parks of Croatia About us Press News Contacts Sponsors and partners

“Always ready to help, with his own means too, if he encountered people in distress, and almost uncivil towards all those he had considered the slugs of human society”.

Responsible for the afforestation of the islands

The administrator of Brijuni

After purchasing the Brijuni Islands, the Austrian visionary Paul Kupelwieser began transforming the islands into an elite destination. In order to find support for the afforestation of the island, Paul Kupelwieser traveled to Trieste. Although he had been received extremely unkindly in the Department of Forestry of the City Administration, the office clerk advised him to look for Alojz Čufar in Labin, which proved to be an excellent decision.

Cultivating the islands he adored so much

Before arriving on the islands, Alojz Čufar also served in the town of Vodnjan and Galižana, from where there is a view of the Adriatic coast and the Brijuni Islands. Sometimes the Brijuni looked like a dream land shining from afar, and  as the entire Kupelwieser family took a liking to him, he was given the opportunity to work on grubbing up and cultivating the islands he adored so much.

Alojz Čufar was appreciated not only by the Kupelwieser family, but also by many people from the coastal areas, who held him in particular repute. He was an extraordinarily honest and reliable man.

From 1894 until his death, Čufar had been the administrator of Brijuni responsible for landscaping the island – grubbing out the maquis and afforestation (tens of thousands of trees), clearing the meadows and quarries of waste stone, which were used for the construction of numerous roads and trails (50 km) and organization of quarries that have been converted into promenades that were pleasant throughout the year. Cooler in the summer, and protected from wind in the winter, they became favorite places of guests on Brijuni.

Vineyards were planted on cleared meadows, and wine from Brijuni was sold in Vienna and Budapest. He thoroughly implemented the measures of Robert Koch (swamp drainage and backfilling), which contributed to the successful eradication of malaria on the islands.

In gratitude, the Kupelwieser family erected a monument for him in one of the quarries.

Thanks to Čufar, today the islands are marked by a harmonious flora, while numerous quarries have been successfully hidden and converted into promenades. 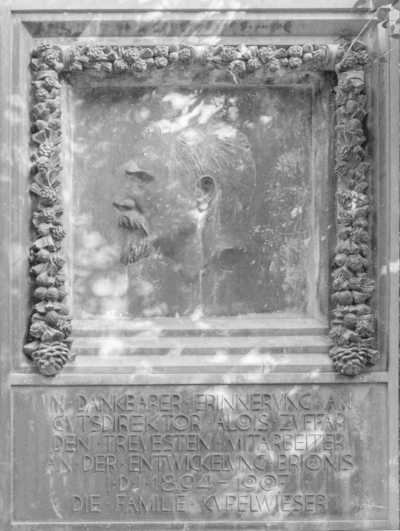 Visit the Brijuni Islands in order to get to know Alojz Čufar and this little piece of paradise better.