A legend of Brijuni

Koki, Tito's well-known parrot and one of the rare examplars of yellow-crested cockatoos which live up to 100 years, is a legend that lives on Brijuni Islands.

Koki belongs to larger species of parrots which are characterized by very stocky posture, pretty robust and corpulent body measuring 50 cm in height, strong and robust bill with a crest on its head. This is a very intelligent, social and amiable bird species that likes bathing.

Tito's gift to his granddaughter Aleksandra

Josip Broz Tito gave Koki to his granddaughter Aleksandra (Saša) Broz as a gift for her ninth birthday. Koki had been absent from Brijuni for some time, but during the last three decades, besides the elephant Lanka, he has been the most attractive inhabitant of the islands.

He speaks, struts around and sometimes even wants to shake hands

This white, half-century old trickster with some yellow feathers is the incarnation of a good tourist worker, a creature that knows how to animate, seduce and be the center of attention for an unlimited time. He speaks, struts around, and sometimes he even wants to shake hands. This parrot certainly knows many secrets of Brijuni, and almost all famous visitors to the islands (e.g. Princess Caroline of Monaco, the actor John Malkovich) took photographs with him. 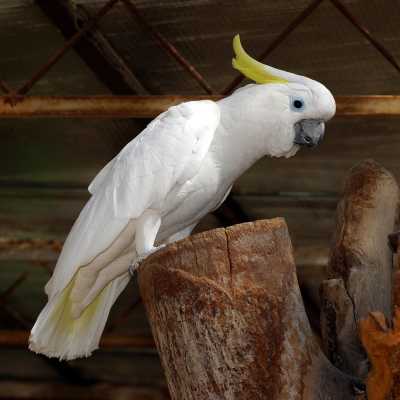